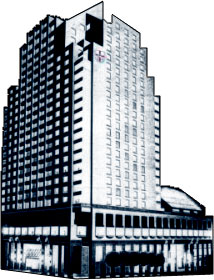 Initial funding in the amount of US$60,000.00 is being solicited to cover the Pre-Feasibility study. Target date for completion of the Study is 12 months from the Start date and release of funds for mobilization.

Note: An all-volunteer Pre- Feasibility study group has been organized. The project study steering committee, chaired by Dr. Sta. Romana Jr., oversees and integrates the separate studies being conducted by the Marketing, Technical, and Finance study committees. The Project team is headed by Mr.Victoriano Miranda who is the Project Team Coordinator. Utol proposed hospital building

The proposed complex to be located within an area comprising about 10-20 hectares, shall include a General Hospital/Medical Center, a Medical Arts Building, a nursing school, a coliseum, a hotel complex and dormitory units.

The proposed 800 bed capacity shall be a state of the art Medical Center and will be the premier Tertiary hospital in the country and in the Southeast Asia and is intended to showcase the best of what Christianity can offer to the sick and suffering.

The Medical Center shall principally cater to the fast growing Christian community, estimated to be almost 10 million nationwide at present and growing at 8% annually.

The Medical Center will be complimented by a nationwide network of satellite hospitals, Medical clinics and diagnostic centers in highly urbanized areas of the Philippines.

The hospital will adopt a wholistic, unique healing art technology and will adopt a hotel-like concept and ambience, as is the prevailing modern concept of how the hospital should best serve its clientele, to be reflected in its facilities, amenities and patient-friendly atmosphere. Latest architectural and engineering designs to be prepared in teamwork with experienced world-class hospital designers will be developed for this purpose. The Australian Hospital Design Group is being considered as most likely to provide the Foundation with the necessary expertise in this regard.